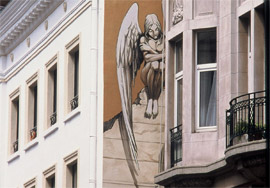 Peter Van Dongens’ crystal-clear style combined with his meticulous historical research are just the perfect combination for bringing long bygone times back to life. The graphic novel Rampokan is proof of that because he has painted the reader a very accurate picture of the turbulent final years of Dutch Indonesia. In 1999, the Comics Art Museum awarded Peter Van Dongens the Le Lion prize for his two-volume graphic novel set, which gained international acclaim. In his adaptation of Familieziek, the short novel by Adriaan van Dis, the renowned Dutch author, the reader is yet again effortlessly taken on a journey back in time to the Netherlands of the 1950’s. Yet another gem of comic strip art and nostalgia, and one which the Comic Strip Museum takes great pleasure in welcoming to its Gallery.

Peter van Dongen has adapted the short novel Repatriated [Familieziek] into a graphic novel by the same name. It is a story depicting scenes in the life of a war-stricken Indian family that is doing its utmost to settle in Holland in the 50’s. Behind the curtain, the mother and sisters talk about their secrets in hushed voices. The father, who is intent on having their rights restored, is warning his son against yet another threat; the Russians! Amidst all this confusion, the boy seeks solace in an imaginary brother, whose presence he can feel but who must never be mentioned.

Peter van Dongen (1966) is a comic strip artist and illustrator. He made his debut in ‘De Balloen’ at the tender age of 16. In 1990, he published his graphic novel Muizentheater [Theatre of Mice], and in 1998 and 2004 he respectively released Rampokan: Java and Rampokan: Celebes; a graphic novel in two volumes that is set on the eve of the colonial war waged in Indonesia by the Dutch. In 2008, he started work on his graphic adaptation of the novel Repatriated [Familieziek] by Adriaan van Dis. He is currently working in collaboration with Teun Berserik on part 26 of the Blake and Mortimer series, which is due to be released in 2018.

Adriaan van Dis (1946) grew up in Bergen aan Zee in North Holland in a family with an Indian (war) background. In 1993, after his debut novel Nathan Sid (1983), he rose to fame with his novel My Father’s War [Indische duinen] (Gouden Uil, Trouw Publieksprijs). In Repatriated [Familieziek] he portrays his father as a migrant, who is trying to find a job in the Netherlands. Adriaan van Dis has received a whole string of prizes for his work, including the Constantijn Huygensprijs in 2015, which celebrated his entire body of work. His writings have been translated into numerous languages.