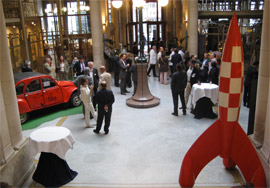 The Belgian Comic Strip Center, a true temple dedicated to comic strip art, is also an undisputed masterpiece of the Art Nouveau.

The marriage of the 9th Art and Art Nouveau 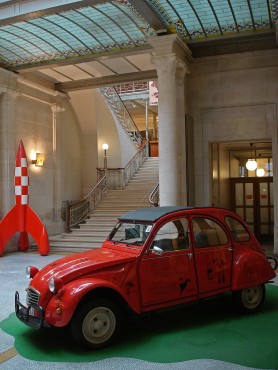 Located in the heart of Brussels, in a majestic Art Nouveau building, created by Victor Horta in 1906, the Belgian Comic Strip Center opened its doors to the public on October 6th 1989. In no time this impressive museum became one of the main attractions of Brussels. Every year more than 200.000 visitors come here to explore  4.200 m² of permanent and temporary exhibitions.

Housed in one of the oldest districts of Brussels, just a few steps away from Grand’Place and the Royal district, the Belgian Comic Strip Center seduces in many ways. Come and enjoy the magnificent architecture as well as the communicative pleasure of comic strips.

The BCSC assembles anything that deals with European comics, from its prestigious beginnings to its latest developments.

Temporary and permanent exhibitions have transformed this Art Nouveau gem into a living and attractive temple. It is a dynamic and exciting place where everything is done to promote the Ninth Art (associated with the creation of the Brussels Comic Strip Route, the issue of Comic Strip stamps, etc...). It is also a cultural ambassador for Belgium, its regions and communities, a reference in the world of comics as well as a unique documentation center. The Belgian Comic Strip Center also produces, for many partners, conferences, books, creative workshops and counciling.

The kingdom of comics 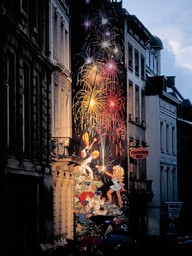 With more than 700 comic strip authors, Belgium has more comic strip artists per square kilometre than any other country in the world! It is here that the comic strip has grown from a popular medium into an art in its own right. Nowhere else comics are so strongly rooted in reality and in people's imagination.

If you come to visit the Belgian Comic Strip Center, you will witness the unusual marriage of the Ninth Art and Art Nouveau, two artistic forms of expression which have always been particularly cherished in Brussels. This kingdom of imagination is home to some of Belgium's best-known comic strip heroes: Tintin, Spirou, Bob and Bobette, the Smurfs, Lucky Luke, Blake and Mortimer, Marsupilami, etc. They are one big happy family of paper heroes. We can safely say that the heart of European comic strips beats in Brussels.